skip to main | skip to sidebar

In the mid-1930s Gleason began working East Coast nightclubs as a stand-up comic and found his niche. Discovered by Hollywood tycoon Jack Warner, Gleason was soon appearing in movie bit parts, and by the late-1940s on that new-fangled picture box called television.

No entertainer ever seized a TV audience like Jackie Gleason. The success of his 1955-56 sitcom The Honeymooners established Gleason as the medium's top comedian, worthy of his moniker "The Great One." And no entertainer ever lived larger or partied harder; Gleason's all-night antics at Toots Shor's famous New York saloon became legendary.

In 1962 Gleason premiered a Saturday night variety show on ABC, shot in New York, called American Scene Magazine. It was a ratings hit.

Then a Miami Beach public relations executive read a gossip column in which Gleason professed his new-found love of golf. He contacted Jackie: Why not move your show to Miami Beach, he asked, where you can golf year-round?

To sweeten the deal, Gleason was offered a magnificent home on a fairway at the Miami Beach Country Club, a state-of-the-art broadcast theater, and a golf cart shaped like a mini-Rolls-Royce, customized to accommodate Jackie's lifestyle: radio, TV, turn signals, and a fully-stocked liquor cabinet.

Gleason agreed to broadcast American Scene for the 1964 season at a weekly salary of $205,000. Jackie made the New York-to-Florida trip, accompanied by an entourage of 45, on his 85-foot private train car dubbed "The Gleason Express." It was a 2,000-mile non-stop party. (Today, Gleason's private train car is on display at Nashville's Tennessee Central Railway Museum. The car features an elegant dining room with service for 20, a richly-paneled lounge, fully-equipped kitchen, extra-large bedroom for Jackie, and crew quarters).

When Gleason and friends disembarked in Ft. Lauderdale, one journalist described the scene as, "the biggest thing to hit Florida since the land boom."

From 1964 to 1966, American Scene Magazine was TV's only national program broadcast from Florida. The format each week:

Voice-over: "From the sun and fun capital of the world..."

Enter: Gleason, a gorgeous babe on each arm, declaring, "How swe-e-et it is..."

Then: Gleason's monolgue, ending with "...and away-y-y we go!" followed by crazily ad-libbed dance steps.

Enter: The June Taylor Dancers, whose synchonized steps were shot by an overhead camera.

Then: Comedy sketches featuring the Poor Soul, Reggie Van Gleason III, Joe the Bartender, and show-stopping baritone Frank Fontaine, who would appear as a punch-drunk named Crazy Guggenheim. After his Guggenheim act, Fontaine would break into song...and bring down the house.

Finally: Gleason would reappear on stage to thunderous applause and proclaim: "Miami Beach audiences are the best in the world!"

To the luckless folks living up north, American Scene was like a living, breathing, dancing postcard from paradise. In Gleason's Florida it appeared everyone was having a ball.

How many northerners vacationed--or picked up and moved--to the Sunshine State due to the allure of Gleason's world? Impossible to know, but it is safe to say Florida never had a more potent Ambassador of the Good Life.

It would be the last regular TV show for the Great One. Instead, Gleason played golf nearly every day, soaked up the Florida sun, and made a string of bad movies. From 1972 to 1980 he hosted a PGA golf tournament in Lauderhill. By the mid-1980s, Jackie's health began to fade. Despite doctors' orders, Gleason continued to smoke six packs a day, and to drink heavily.

He died in Ft. Lauderdale on June 24, 1987, and was laid to rest at Miami's Our Lady of Mercy Cemetary. The gravesite features a reproduction of a four-columned Roman temple. There are four steps leading to the gazebo. Engraved on the last step are the words:

In death as in life, the Great One knew how to leave 'em laughing.


--Ken Brooks, Yesterday in Florida magazine, Issue 20
Posted by TGB at 7:29 AM No comments: 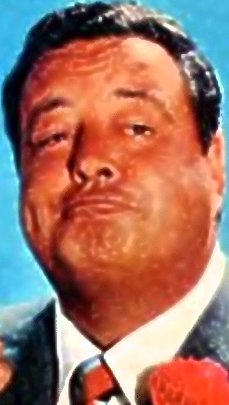 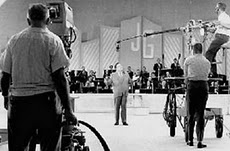 Above and below: Rare behind-the-scenes photos of Gleason on stage in Miami during the filming of American Scene Magazine. 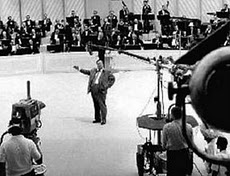 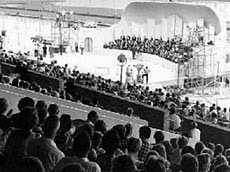 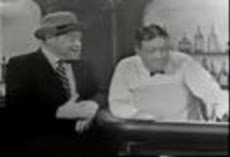 Crazy Guggenheim and Joe the Bartender 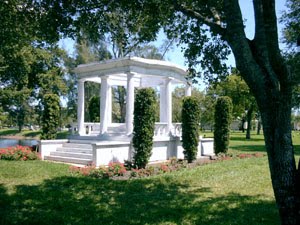 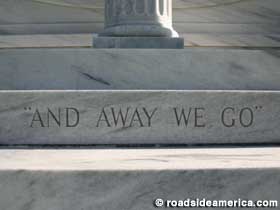